Once actually to Camaronal Beach, the project started and turned out to be phenomenal.

First off, the people were amazing. There were individuals or groups of people from all over the world and gave me a chance to become acquainted with different origins, cultures, world views, and the individual stories of arrival at Camaronal

uVolunteer made the initial entry into the country quite simple and organized transportation to the temporary volunteer dorm before departing to the actual volunteer site, Camaronal Beach. The stay in the San Ramon dorms gave us a brief taste of Costa Rican culture and city life. 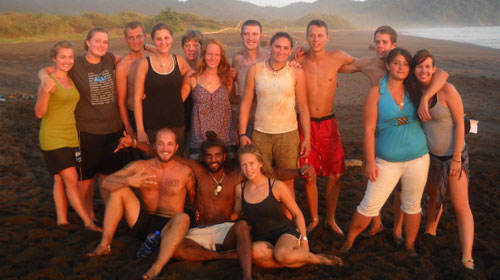 Once actually to Camaronal Beach, the project started and turned out to be phenomenal. First off, the people were amazing. There were individuals or groups of people from all over the world and gave me a chance to become acquainted with different origins, cultures, world views, and the individual stories of arrival at Camaronal. The biologists that we primarily worked with, Nelson and Andres, made the biggest impact on me with regards to people. Nelson, the park ranger was significant both as a friend and educator.

We patrolled the beach with Nelson for the first couple weeks and learned the various skills, techniques, tracks, and protocols necessary for turtle conservation.

In the hours not working, Nelson was a lot of fun in socializing, practicing language (Spanish for me and English for him), playing games, etc. Andres, coming later, was an enjoyable addition to the group, especially watching the jests between Nelson and Andres. With the two combined, it was a refreshing mixture of biology, socializing, culture, and history.

The actual volunteer experience was very rewarding. Not being overly labor intensive, the volunteers had the opportunity to visit nearby towns. This gave us an excellent look into Tico life and daily operations of Costa Rica in towns such as Estrada and Nicoya. Other towns such as Samara or to a lesser degree, Carrillo gave insight into the significance of the tourism industry to the country. The beach work was quite memorable. It consisted mainly of patrolling the beach at night for poachers while assisting hatchlings and relocating nests to a hatchery for protection from predators.

This routine led to a program full of starry nights (a few of which consisted of meteor showers) and beautiful sunrises. It was also very rewarding knowing that you are making a difference to species that otherwise are dwindling in population. It is especially amazing to see these different groups of people from distant parts of the world uniting under one cause. As time progressed, our group was given more and more responsibilities on patrols. This was gratifying in that 1.) We were trusted to do the job and do it correctly and 2.) We were adequately prepared to train new volunteers or easily field any question received by volunteer or tourists alike. Also, with the additional responsibility came a sense of ownership of the project and conservation of turtles which in turn motivates you all the more. In addition to night patrols, other work consisted of clearing the beach of trash, maintaining the hatchery, helping cook and clean the volunteer area, and assisting build an additional volunteer living space.

Overall, the experience was extremely positive. I do not have any specific grievances and would recommend the program to anyone. The combination of the work, the environment, the weather, the people, the culture, and the cause led to an experience unlike anything else in my life. Though cliche, it definitely holds true that this has been a life changing experience for me. Having never been out of the country, I was surprised to be less shocked by the culture as I was enamored with it. The mentality of Ticos is quite different than the United States and lends itself to a much more relaxed life. I truly enjoyed the experience, and with any luck I will be back in a year’s time.