My official job was PE and Sports Instructor, but I also taught English two nights a week to adults, and helped coach and teach tennis to groups and individuals.

I arrived to San Jose and was greeted by many people, and many attempting to sell things to us tourists. I was met by a wonderfully nice woman, Flor, who was my host mom at my language school in Heredia. I lived with them for two weeks, enjoying the wonderful food that she provided me everyday, especially the fresh fruit. As a vegan, my 6 months here I have quite enjoyed the abundance of fruit and vegetables, and the everyday offerings of gallo pinto. But, after two weeks of language school, and then heading to my real placement in San Ramon, my Spanish was beginning to pick up. 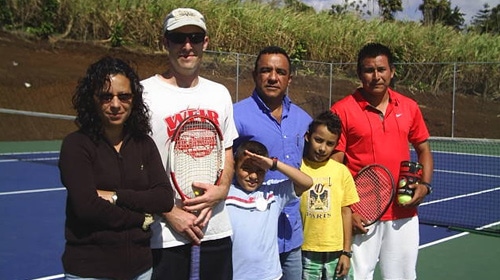 After five and half months of my time in San Ramon, my Spanish is now at an advanced level. I have definitely worked on it, taking classes for about 3 months here, studying when I have free time and teaching PE in Spanish, and speaking to my pre-beginner English class in Spanish about 70% of the time. Further I taught private tennis lessons in Spanish, and I am now quite comfortable talking to anyone about anything in Spanish. While I am still learning and I am not completely fluent, I am pretty close, and am currently applying for bilingual jobs in the United States upon my return.

My jobs have all been great experiences; I definitely found my niche while here. My official job was PE and Sports Instructor, but I also taught English two nights a week to adults, and helped coach and teach tennis to groups and individuals. My two schools were night and day in which I taught PE. One was close to rural, and the kids were wild, the school was organized, and the principal was absent most of the time. The other school was more organized and ran like clockwork, and the principal has taught there for 40 years, not an exaggeration.

The kids were very loving in my schools, but quite energetic. Generally, American kids have more structure, and are easier to organize.

The Pura Vida attitude applies to the kids, and they sometimes resisted working too hard, and were content playing soccer or jumping rope. I alternated my time attempting to find games which all kids liked, or at least giving options to kids who were not into the current activity. Most days were smooth, some not. The majority of the time I felt like my time was a success, as this is the first PE that these kids have had in a few years at one school. At the other, it was the first PE ever!

My tennis work kept me quite busy also. uVolunteer had told me about a tennis group, and I met Napoleon and Ralf (German Tico) within the first month. I helped Napoleon with his Sunday groups of students, and took over teaching afternoons for 4 weeks when Ralf took a vacation to Germany.

The tennis community was quite nice, and it gave me an opportunity to do what I do, teach and play tennis!

Finally, the job that I didn’t even plan on doing, teach English, was probably the most enjoyable. My class of adults and one teenager has been so nice to me; they truly respect and appreciate my helping them with their English. They actually brought my fiancee, who came to volunteer for three weeks, flowers on her first day along with a goodbye party for her, complete with food and presents, when she left. It will be quite sad when I leave them in a week; they are the people that I have grown very close with.

I lived with my family for 5.5 months, and have learned about the culture, most notably, pura vida. For better or for worse (mostly better), the Ticos are very laid back, as evidenced by the fact that I saw angry people only 3 times in 6 months here. On the flip side, the laid back attitude of the people translates to not worrying or understanding the stray animals here, and the large problem of homeless dogs. The love of families is big, and the basic love of life is apparent in mostly everyone you meet. This is backed up by the recent study that Costa Rica is the happiest country in the world. Another example of the attitude of Costa Ricans existed after I witnessed a minor fender bender. The people calmly got out of the cars, shook hands, and THEN looked at the damage of their cars.

uVolunteer is buen gente, or good people. All of the people in the small organization, either Ticos or not, are kind hearted, hard working, friendly people. Suris sense of humour was great, and his experience of knowing the community (he knows everyone in town) makes it an easy transition when starting a job. I deeply appreciate his time talking with me and helping me at my sites. Fio was wonderful also, while 10 years younger than me, she was able to relate well with the youngsters but was also professional, organized, and very knowledgeable about her job. She was very kind when she helped me and my fianc̩e Dana go to the doctor, when Dana got a sinus infection. Others such as Xenia, Meow, and Nat, along with my former volunteer friends who now work for uVolunteer, Christina and Lindsay, are really nice people, with the limited time I spent with them.

I was an older, 34 year old Volunteer with only a handful of us near or over 30. I had wanted to live abroad for 13 years now, and the goals that I set were very important to me. I was pretty focused on these three goals and I met all three. uVolunteer was a good program for me, and I recommend it completely particularly if you have goals similar to mine.