It was hard work and I remember looking at Joan and his friend wordering how they do this every day.

Every musche in my body was aching! Yet they never stopped or even slowed down. Sometimes we would catch them laughing when they saw us mess up but theirs faces (especially Joans) always glowed with gratitude.

We were introduced to the other volunteers and given a mini tour of what old volunteers had explained t us was called the “casa de gringos” by the locals. 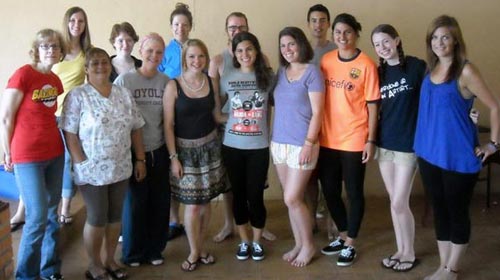 Ours first day on the job was challenging. Along with 3 other volunteers, I started shoveling dirt and digging trenches in order to make the foundation of Joan’s house, the young man whos house we were building. Joan worded with us eveyday and was always the first was on site and smiling everytime he saw us arrive.

We had spent almost 6 hours that first day in the burning sun and at the end of it we walked home with burns on our backs and shoulders, dirt on our legs and arms, and blisters on our hands. After having showered and relaxed for a couple hours, we sat down for dinner with the rest of the volunteers and ate delicious food which Dona Isabel had prepared. We spoke about our day and share many laughs. For the rest of the week, we just kept digging. It was hard work and I remember looking at Joan and his friend wordering how they do this every day. Every musche in my body was aching! Yet they never stopped or even slowed down. Sometimes we would catch them laughing when they saw us mess up but theirs faces (especially Joans) always glowed with gratitude.

That weekend, the group took a trip to Quepos were we enjoyed the beautiful beach and massive waves which gave me a new respect of the strengtl of the ocean! The boat trip, snorkeling, animal watching and dinners allowed for amazing memories.

Back at work the next week we kept shovelilng, tranferring dirt and mixing cement. Finaly on ours last day we started laying bricks. When it came time to say ojur goodbyes, I knew how happy Joan was that he had us helping him build his house. He bugged us that day, that we were abandoning him and asked us to stay longer. I felt that I had done gook work knowing I had helped even just one person. Joan had never judged us or looked ata us in a weird way, even considering that female construction workers are non existant in Costa Rica. To him, I felt licke he saw the four of us as a gift to him. But to me, being able to take part in the building of his home usas a very powerful experience. His house, which he was going to live in with his mom, was the size of my kitchen and living room. It was only a fraction of the size of houses found in Canada, yet what we built with our hands was worth so much more than any mansion back home. As I waved goodbye one last time, he was smilling just like that first day. I wished I could of given him more because he had given me so much by allowing me to see theings in a way I had never experienced before. Even though we didn’t speak the same language and didn’t have the same culture, I felt a bond with him stronger than some thata I have with people back home. Along with the 3 other volunteers, we had built something more than just a home.