The students were greatful for my assistance and my only work is that I had been able to absorb and learn more of the language.

I saw this as a good sign for the whole trip. I had planned on a week in Spanish School in San Jose to be followed by a month of volunteer work helping adults learn English. I attracted to uVolunteer because they offered a program that help adults learn English so they might get better jobs and in turn improve their lives.

Instead of apple trees, blackberry bushes and quiet, low emissions vehicles, I was surrounded by mango trees, banana trees and loud trucks and cars that belched thick clouds of pollution and the language issue: I was placed with a woman who spoke no English. Clearly I had underestimated how tiring learning another language can be. 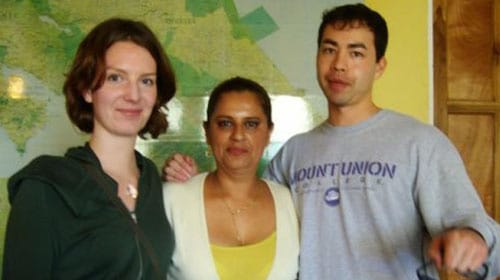 After 5 days of trying to pick up where any high school Spanish had lift off. I was ready to get to work.

On Friday after class, Fiorela arrived at the school and we took a bus to San Ramon. About an hour later we arrived and took a cab to where I would be staying for the next 4 weeks.

After a somewhat awkward introduction to my host family which like the one before and not speak English. I moved into my room. My first week in San Ramon, I worked in a class helping with pronunciation and definition. Having helped give the students then final oral exam I was scheduled to teach the students on my own for the next two weeks. This vacation each day I had a different member of students which ranged from 1-4 students. They were eager to learn English and share their own language with me.

The last week I continued working with the students who had passed the class two week before I was assisting a new teacher who wanted my input and recommendation.

Overall my volunteer work consisted of helping with proper pronunciation and as a translator. The students were greatful for my assistance and my only work is that I had been able to absorb and learn more of the language.