Victoria and I became very good friends over the two weeks that we stayed together.

Our work at the zoo consisted of preparing food, and feeding the animals in the morning, then cleaning enclosures and paths in the afternoon. It was very tiring work, but also very enjoyable! I met so many new and interesting people! (and animals).

I arrived at San Jose airport after 26 hours flights from Australia! Relieved and super tired, I was brought back to the San Ramon dorms with two other volunteers- Karen and Vicky. We dumped our bags and immediately fell asleep! I woke the next day to the smell of a traditional Costa Rican breakfast of riceandbeans, eggs and bread. Delicious! Afterwards, we took a tour around San Ramon with our lovely coordinators Ligia and Mario. 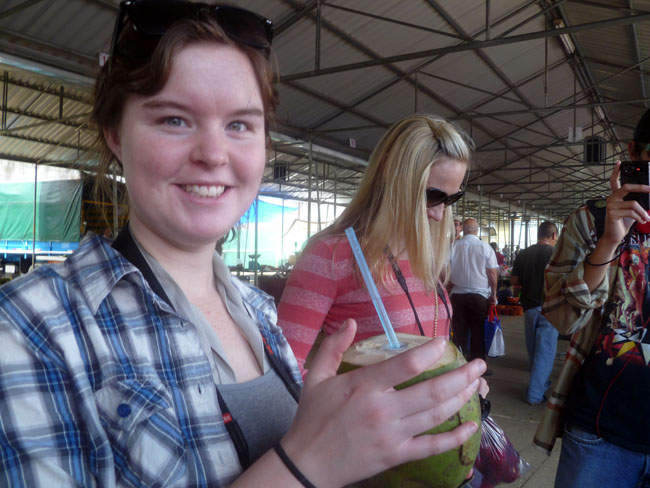 I learned a lot about the culture in these first few days and started to get an idea of how my stay in Costa Rica would be!

The next day, I was put on a bus with instructions to change to another bus, then another! This was very daunting as I spoke very little Spanish! Nevertheless, I arrived safely that afternoon at my destination- La Marina Wildlife Rescue Centre.

I had a quick look around, then was taken to my host family where I could finally unpack my bags and settle in! I lived in a pink house, with my host grandmother – Nellie, mother – Xinia and sister – Isabella (who spoke a little bit of English, thank goodness). Shortly after my arrival, I was introduced I Victoria, an Austrian volunteer and my new housemate! Victoria and I became very good friends over the two weeks that we stayed together. Our work at the zoo consisted of preparing food, and feeding the animals in the morning, then cleaning enclosures and paths in the afternoon. It was very tiring work, but also very enjoyable! I met so many new and interesting people! (and animals).

Each day after work, Victoria, Lavinia (another volunteer from the zoo) and I would do something together to fill in our time. We went to the local hot springs together, had “cookie dates” with local children, visited Cuidad Quesada (the nearest town) and on the weekends we travelled: to the Carribean coast, staying in hostels at Limon, Cahuita and Peurto Viejo.

The towns, jungles and beaches on the coast are all so beautiful and diverse! Everything I saw looked like it could be on a postcard! But be careful not to drink the water! One of the more interesting experiences I had here was working at the zoo, chopping bananas when a big earthquake hit! Bananas went flying, all the animals fell over and went crazy, trees fell down! That, combined with the loudest thunderstorm ever- which happened later that afternoon, made for one crazy day at the zoo! Fortunately, nobody was hurt where we were.

Two weeks of crazy adventures later, I’m sitting at the San Ramon dorms again, wishing I could have stayed longer!

The weeks flew past! But I will never forget the experiences I had here, either alone or shared with the friends I met along the way. I am so grateful to uvolunteer for giving me the opportunity of a lifetime, and I’ll be sure to come back and do it all again!