We started the morning by salvaging wood from a rundown barn near the chicken coop.

We got the pieces we needed and trekked off into the forest. Once we had built a couple of the benches we began to go around and test them out. We sat on top of our work with pride listening to the sounds of the forest and watching to see if we could make out who was making the noise.

His mother lay nearby dead and Omar rescued the baby and brought him to the reserve. Roberta and Dan named him Peluchi,and when I met him he was hanging outside a small tree near their home. Omar picked some hibiscus flowers and gave them to him, which he gobbled up with relish. Needless to say he was incredibly cute and quite the stinker. 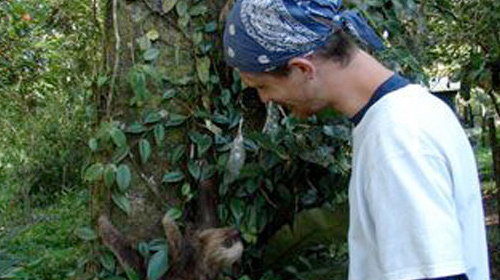 Day 4:
Thursday morning Omar and I had a special project. Roberta had given us a liter of gasoline and told us to kill a nest of killer bees that had made their hive next to the water tank. So we set off into the forest,collecting tree seedlings and clearing the way along the trails. When we got to the place, the nest was located inside the base of a tree. Omar doused the opening to the hive with the gasoline, as well as a feedstock bag and lit it. Flames shot up and around the opening and we stood and watched it burn. Every so often we would toss capfuls of gasoline onto the blaze to make sure that the nest was crisp. We continued to collect tree seedlings as we headed back to the nursery, where we sorted and transplanted our bounty into black plastic bags. When we had finished Dan pointed out some of the orchids blooming on the property. Some of them smelled like cinnamon. All in all it was a great first week.

Day 7:
Sunday was a special day for La Reserva. An annual fundraiser was being held at Lago de Arenal. It was a bbq, with prize drawings, boat rides, and a live band. I showed up at the reserve around noon and caught a ride with Dan and Roberta. They gave me a free t-shirt with the logo and slogan of La Reserva, ‘always a tree for my future’. When we got down to the lake we helped Mary, a friend of La Reserva and the person who was in charge of the fundraiser set up. We brought more t-shirts, hats and information about the reserve. One of the prize raffles was for native plants we brought and ornamental plants donated by another local nursery. People from the community brought food, which was excellent. After socializing, eating, and selling a few hats I got to go on a sailboat ride and cruise one of the coves. The best part was that at the end of the day over $2000 was raised to help support the work of La Reserva. It was also a great chance to meet some more people in the community and have a great time.

Omar and I started a new project to build benches at strategic locations throughout the reserve. We started the morning by salvaging wood from a rundown barn near the chicken coop. We got the pieces we needed and trekked off into the forest. Once we had built a couple of the benches we began to go around and test them out. We sat on top of our work with pride listening to the sounds of the forest and watching to see if we could make out who was making the noise. It was very peaceful to sit in the stillness and quiet gloom cast by the shade of the trees around us. Sigh!

Day 11:
Today was a cold, wet, windy day! Omar and I went out into the fields to work in one of the biological corridors. We were replacing dead trees along the perimeter of the living fence. The morning started with a cloudy mist that maintained itself the entire day, leaving us sopping wet. To add another element, the wind was
a cold one from the North and made sure to remind us of its presence. In the late morning we spotted a coyote off near the edge of the forest. Omar made a few howls to which it howled back in response. Then a little later it made a closer approach and Eskippe, Omar’s little dog pal, decided to chase after it. We shouted for him to come and I was sure he would end up a tasty meal for the coyote, but he came bounding back up the pasture happy with his courage for standing up to the coyote. Despite the rain, wind and unusual cold spell, the work
was gratifying, knowing what the end result would become, a way for the animals to migrate and journey from one forest to the next.

Day 15:
This Monday signaled the start of my third week at La Reserva. While hauling firewood we came across a boa constrictor curled up in the branches of a tree. I have seen them before as pets or at the zoo but never in the wild. It was an amazing sight! We worked the rest of the day expanding the nursery to get new tree seeds sown and growing into seedlings. We filled black plastic bags with soil and leveled the ground where we would stage them. One of the tree seeds we planted was Guanacaste, an ecologically important tree in tropical and dry tropical forests. It is also the tree of the province La Reserva is located in, Guanacaste Province.

Thursday morning we had some special visitors come to La Reserva. A local school group whose class was studying ecotourism came to take a tour of the forest. Roberta led the group the group with Dan and I bringing up the rear. As we walked through the forest Roberta would stop at certain spots and give an
explanation of some of the wonders of the forest, like the reproductive cycles of wasps and figs. Along the tour we saw a pit viper curled in a nook of a tree, and passed by Papa Loco, a gigantic Ceiba, or kopok tree in the reserve, whose diameter is several meters. We delighted in the smell of some orchids and talked about leaf cutter ants. The class was very interested and asked lots of questions with many pictures taken. The tour ended midday and the class came back to house only to be overwhelmed by Jenno, Dan and Roberta’s Great Dane. After the group left Omar and I went to fill more black bags with soil when a family of monkeys climbed in a nearby tree to eat. There were fifteen of them, with adults and some small babies climbing around. Some were even just hanging by their tails with no hands or feet munching on leaves. We sat and worked and watched them
eat and play. It was terrific!

Day 24:
My time is coming to an end here at the reserve. I have had a great experience working here, from learning the native trees and seeing abundant wildlife, saw toucans today, to knowing how to regrow a tropical forest and some techniques on how to do that. I also got to leave my footprint on the reserve in the form of
benches, expanding the nursery by a thousand or more trees, and other maintenance that needed to be done around the farm. My time here is filled with memories that will last a lifetime. It has also fostered a desire in me to expand my skills and knowledge base about tropical forests and work in tropical conservation. I feel anyone who comes here with the desire to learn and experience the richness a tropical forest has to offer will leave with a wealth of treasures. Some day I hope to return to this forest and work in it again, and to see what I have tended
grow to become something more than a tree, but a forest community.