I explained that I have been playing my whole life and I know it is easier to catch a ball with two hands.

After some of them listened to me after I had repeated it a million times, they finally realized it works. Slowly but surely more and more kids became interested in this new sport they had yet to discover. I would teach, I would say 20 kids, how to play catch and then they started to teach each other.

I would bring my glove to school and during break some kids that were interesting in learning how to play catch would come with me for a little session. I would always emphasize DOS MANOS…two hands when catching the ball. I explained that I have been playing my whole life and I know it is easier to catch a ball with two hands. After some of them listened to me after I had repeated it a million times, they finally realized it works. Slowly but surely more and more kids became interested in this new sport they had yet to discover. I would teach, I would say 20 kids, how to play catch and then they started to teach each other. 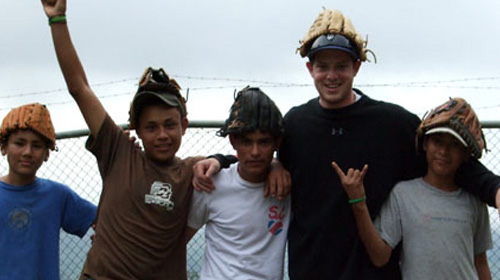 One day, something incredible happened. While I was teaching some kids how to play catch, my partner Brandon yelled to me, “Dude, their playing baseball over there.” I took a quick glance and saw what I had dreamed of. One of the kids picked up a piece of a broken chair and used it as a bat. There were only two bases, a big lump of dirt and a plastic bag. I joined in. Now I was on a team with 3 students vs. Brandon and 3 others. We played until the bell rang. It was amazing. I had created something completely different and I was so proud that my goal had been accomplished…almost.

There was so much interest by this little game that the kids wanted to play a real game. I told them that I could play on Wednesdays at 3.

That Wednesday at 3 I showed up with the bat I had brought with all of the balls and gloves. There were about 7 kids around the ages of 10 or 11 that came. We started to play a little game and then at 4 oclock all of the big kids got out of school and it seemed like the whole school came down to play. It was something I had only dreamed of. One kid hit two home runs. We played for an hour and all the kids, including me, were thrilled. Next Wednesday profe? Si, si.

So the first trip I took was to Volocan Arenal. I stayed at hostel for 4 dollars a night. Since we, myself and the girls I was traveling with, only were there one night we had to do a tour that night. A bus picked us up at 6. So first of all it was absolutely pouring rain, I mean coming down the size of dimes. We had a free light show provided by the lighting that was hitting every minute or so with Dolby Digital surround sound from the thunder. It was still only 70 degrees out which was so strange, but amazing.

So we started to drive and then we started to off-road after a while. Have you ever been on Indiana Jones at Disneyland? Well if you have, times it by 10, add rain, lighting, thunder, an active volcano. After stopping we got out and followed the tour guide across and floating bridge above a river, not a stream, and river. This was insane. We went to a look-out where we could see the Volcano spurting out lava. It was strange to see where the earth started and so forth. After that, yes there is more, we went to a hot spring. HOLY COW! Now I am not only witnessing nature, I am becoming part of it. It was 90 or so degrees with rain blasting down, thunder providing the light, and with a volcano in the background. I had to ‘scream like Tarzan’ so I did.

The next day out bus didn’t leave until 2:30 so we wanted to check something else out and so we heard about a free lake/Tarzan swing/water hole. We took the 30 minute walk along the highway to finally find it. Mostly locals crowded it and wow there were doing some gnarly jumps off the rocks and Tarzan swing. I took a more conservative approach to it all, but it was a blast.

To sum it all up, my time in Costa Rica has been a life-changing experience. Being able to help children in need, traveling to places I never knew existed, and to live with an authentic Costa Rican family.