What a strange feeling walking up and down the beach at 8:00PM to 12:00AM with nothing but the stars and moon lighting your way.

When I saw my first turtle I knew that coming to Gandoca was a great idea. I was totally clueless to how magnificent they were how huge they were and what an incredible process they go through to lay the eggs.

The bus ride to Gandoca was really long and dragged on for hours!!! At first I really wasn’t sure about what I was getting myself into. I usually adjust to new settings fairly well but, considering that I have a serious phobia of spiders and I was entering the jungle I seriously was second guessing my tolerance. I got in quite late so it was pitch black when I got to my house moms place and the other girls in the house were out on patrol. My house mom didn’t speak ANY English. This for me was another question to what was I doing here! She was very kind with me and tried to act out what she wanted and spoke very slowly so what little Spanish I knew I could hear clearly and go from there. 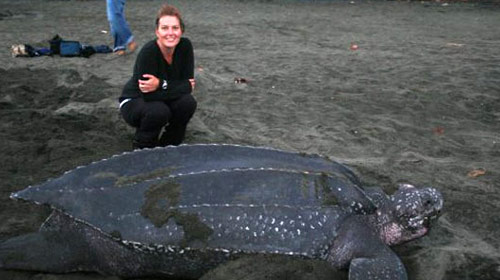 I was blown away by how gorgeous the place where I was staying was. The kitchen I can’t even describe how brilliant it was. Such an amazing place to enjoy meals and be outside! Outdoor kitchen certainly one of my highlights! As I got into my mosquito net that first night my mind was full of all the things that could go wrong the next day I didn’t sleep well. Breakfast was at 8:00 AM and then I met the other 2 gals staying in the house with me. Both amazingly kind girls who were very comfortable to be around and I knew right away these two girls were going to make my time here better then it already was going to be.

I had my orientation at the station and learned more about the turtles and what happens on patrols and so fourth. Very informative and very interesting the things that were explained to me. I was amazed by the responsibility that was given to us as volunteers who knew I would get to touch these amazing creatures let alone hold a bag underneath it to catch the eggs this blew me away. My first patrol was most likely the highlight of my entire trip. What a strange feeling walking up and down the beach at 8:00PM to 12:00AM with nothing but the stars and moon lighting your way. When I saw my first turtle I knew that coming to Gandoca was a great idea. I was totally clueless to how magnificent they were how huge they were and what an incredible process they go through to lay the eggs. I watched the process in awe and I have never felt so at peace almost at how graceful they were how beautiful they looked gently and perfectly creating the hole where they believed their eggs would hatch from, and what they believed to be a safe location. I couldn’t help but laugh when the turtle began to camouflage her massive front arms throwing sand a great distant behind her. This was defiantly the most unique and incredible thing I would see in my life for some time.

I found it interesting how after a certain amount of time you learn to live off such little sleep. The 12:00AM to 4:00AM shifts were always the hardest. My eyelids for the first few hardly could keep open I was fighting off letting them close while I walked it was very difficult.

As far as ups and downs go in Gandoca for me the downs were of course the massive spider I had to kill by myself and all the cockroaches but I’ve learned that you CAN’T miss out on an opportunity like Gandoca because of this fear. I can’t believe I’ve let the fact that I have arachnophobia control what I do and don’t do in life. Sometimes a thing that was hard to deal with was the fact that the some of the leaders (the people who go on patrol with you and guide you) don’t speak very good English if any. It was sad more then anything else because I wanted to learn about these people as they must know so much about turtles. It didn’t bother me all the time because as time went on I learned more Spanish thanks to my house mom and some of my room mates but at times it was classified as a down. To be honest those were really the only downs. Being tired on patrols doesn’t count because that instantly goes away when you see a turtle and work with her. For the ups we could be here a while but I will mention only the main highlights. The people you meet, the journey they have been on to get to Gandoca and why they are there. The fact that I am working with an endangered type of turtle and she is the most beautiful thing I have ever seen. All the work you do whether it is hard work or pretty easy going work is so much fun because you are sharing it with other people.

When I was there I didn’t get the opportunity to do hatchery duty but daily routines were we would always have breakfast, lunch, and dinner at the same time everyday you had to respect those times too.

Each day we would either do hatchery building where we would go out and sift the sand with these big sifters and that requires 2 people and you had people shoveling the sand into the sifters so everyone was apart of some very physical demanding work as wet sand is not light nor is it an easy task to be shoveling it for quite a long length of time. Outside that you did patrol at night time. What I found very cool was that every couple of days we would do something fun with everyone. Whether it was soccer or volleyball or anything it was so much fun. It was nice to have a day off and do some fun stuff not only with other volunteers but with everyone including locals. Another thing that would pop up on the schedule was beach cleaning. Where you would go along the beach and pick up garbage and move logs with everyone so nothing was interfering with the turtle’s pathway to lay her eggs. Along with this would be hatchery duty if it was done but when I was there I was building it instead of minding it.

Lastly, Costa Rica is such a gorgeous place to be, I didn’t really have culture shock when I went because I had been living in Costa Rica for 3 months before I went to Gandoca. I honestly think though that anyone whether they have been to Costa Rica or not would just be too interested in the surroundings of Gandoca and the jobs you perform there to worry about culture shock. One of the other highlights of living there was the out of this world food. My house mom must have made some of the most amazing tasting food I have ever had the honor of eating!! I don’t even feel like I’m exaggerating.

I could honestly go on for hours about my 2 amazing weeks in Gandoca but I will draw it to an end now as I feel that I have explained enough.

I can honestly stand here and recommend everyone to do something like the turtle conservation in Gandoca. uVolunteer was a great organization to go with as well I was very happy with everything. I really hope that what I have said above encourages people to go to Gandoca I can almost promise you that you will come back and your head will be filled with the amazing awesome times you had in Gandoca with the people, the experiences and most of all the Turtles.