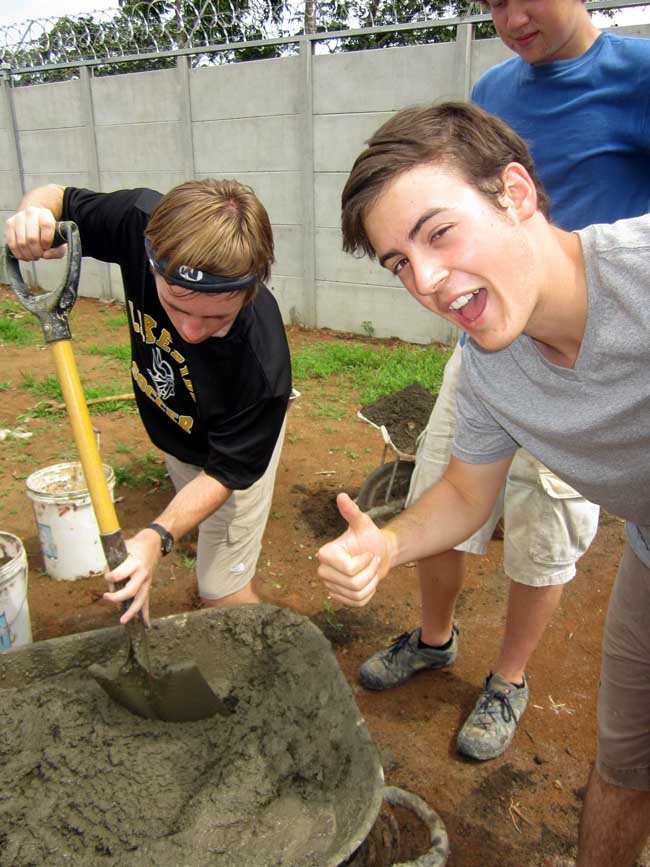 We worked some long hours in the heat but seeing the major changes each day was very rewarding.

Also the benefit of construction was that despite the early start you normally get home early which allowed me time to study some Spanish or go to the gym. To finish off I am returning for a week at the community centre which I am very much looking forward to.

Whilst planning a 6 month trip around the world I decided that I wanted to include some volunteering work that would allow me to really connect with a local community and learn their culture.

My volunteer criteria was that it must be somewhere in Central America with the option to learn Spanish. This was exactly what uVolunteer offered with their link to Epifania Language school in San Jose. The school and my homestay was amazing and in 2 weeks (which I recommend as a minimum for beginners) I felt comfortable with the basics and confident enough to try conversations with locals.

On my last day I was picked up from the school by Ligia and transported with the other volunteers to San Ramon. Ligia was extremely friendly and a great personality to welcome anyone into a new environment, especially for people who might be nervous at first.

After unpacking we were then given the rest of the Friday to meet the fellow volunteers and unpack. The next morning we had our orientation brief that included a brief presentation on the history of the country and tour around the town. Ligia was great, she really cannot do enough to help you settle in straight away. The same could be said about Alicia who made it very easy to settle in to the new environment.

On my first day of volunteering Ligia took us to the community centre and showed us route for the rest of the week (which was simple enough). After meeting all the staff at the centre we then had the chance to go around the local community to see the conditions the kids are living in. Compared to the majority of Costa Rica it was extremely poor and it really put into perspective where the kids come from and hence why they may behave in the way they do.

The mornings were typically quieter but the afternoons certainly made up for it.

The kids would all be fighting for your attention and despite what they have going on at home, they just wanted to play and feel cared for. The typical activities I would do each day would be a selection of the following:

By the end of my second week it was nice to be greeted by the kids and have them call your name. I was even lucky enough to get a present from one of the boys. He had brought in especially two postcards from Chicago that he wanted me to have. It felt strange to get a gift from someone with so little. Just goes to show how generous people can be despite their situation (I wish English people would share that trait!).

For my third week I decided to move over to construction for a week as the community centre had a large number of volunteers booked in. Its not that I didn’t feel important there it was just that I wanted to contribute to somewhere I would make more of an impact for the week.

I had a great week with the builders and the other volunteers. We worked some long hours in the heat but seeing the major changes each day was very rewarding. Also the benefit of construction was that despite the early start you normally get home early which allowed me time to study some Spanish or go to the gym.

To finish off I am returning for a week at the community centre which I am very much looking forward to.

In my spare time at the weekends we went to some of the tourist spots of Costa Rica. The first weekend was Manuel Antonio at the coast. There I did some horseback riding in the forests and tried a bit of surfing. On my second weekend I went to La Fortuna to see the Volcano (Arenal). Sadly we didn’t get to see the volcano because of the weather but we went on a forest trip and had great fun at the Baldi Hot springs instead (be careful of the slides they’re insane!)

Overall I have had an amazing time volunteering in San Ramon that I would recommend to anyone who wants to experience a holiday/trip that is more rewarding than your average package holiday at the beach.

Best wishes for the future uVolunteer!