Teaching in the orphanage was intense, and often quite difficult.

There is no curriculum to follow, you are very much left to figure out what you will teach on your own. But after the first day I was able to get to know my class, and figure out the level they were at, and had some basic activities and lessons worked out for the next day.

I arrived at the airport in Accra sleep deprived after a full day of flying from Australia, so I was incredibly happy when I was easily picked up by Nat and Annette, my two uVolunteer project coordinators. We drove through the mountains to Koforidua, the town that would become my home for the next month. After a weekend of orientation and learning some very basic Twi, I began my first volunteer project; teaching class three in a local orphanage. 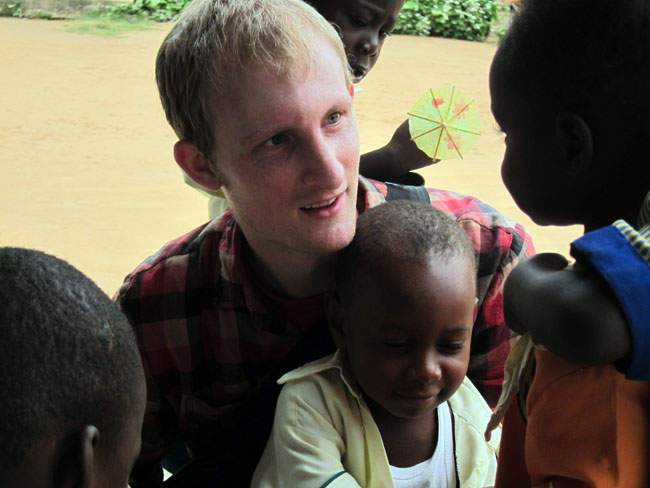 Having the chance to do this was incredible, never a dull moment. Even getting to the orphanage every morning was an experience, sitting and people-watching while we waited for the tro-tro to fill up. Teaching in the orphanage was intense, and often quite difficult. There is no curriculum to follow, you are very much left to figure out what you will teach on your own. But after the first day I was able to get to know my class, and figure out the level they were at, and had some basic activities and lessons worked out for the next day. It was exam time, so there was a lot of revision, but as I never got to see the exams before they were handed out there was a lot of guessing as to what would be helpful to teach!

The standard orphanage program went on for two weeks, after which the school holiday camps began.

We ran two of these camps, one week each, and they were by far some of the best weeks of my life. We would arrive each day around nine in the morning (our tro-tro drivers were quite unreliable) and spent the morning teaching intense English classes. We kept things very basic, especially as the class I was working with were the youngest kids, all around nine and ten. We did a lot of confidence building, getting them to understand that they were allowed to answer incorrectly in our classes. We also did a lot of role-play, getting them to practice using their English with each other. By the end of each week we found there was a noticeable difference in the children’s ability, especially in terms of confidence. After a delicious and filling meal at lunch, we would spend the afternoon competing in fun sport activities – tug of war, sponge relays, apple eating contests. The most hotly anticipated contest was the football afternoon, where the teams of children played off against each other for the chance to play the team of volunteers. People in Ghana take football very seriously, and the children were no exception. We were beaten four goals to three, and were lucky it was not more. The children were incredible at football, even through the majority were playing without shoes! It was really fun, and the children loved playing against us.

I had the chance to do two projects back to back, the orphanage project and also the national park project, so the weekend after the camp ended we took a trip down to Cape Coast and on the way back I was dropped off in Kakum National Park.

I lived with one of the guides in the park, a lovely guy called Ebenezer. Getting the chance to live with a group of regular Ghanians was an incredible experience. It was very basic – no running water, lots of black outs, but living there really let me feel like part of a family. Like the orphanage project, this was very much self-motivated work – I had to ask for and suggest different jobs as they were not entirely sure what to do with me. I got the chance to help take lots of different groups through the park, and over the canopy walkway Kakum is famous for. I was also doing work like clearing trails, digging stairs, and I even ended up building a chicken coop! Being behind the scenes allowed me to see and experience much more than the average tourist, some highlights include being able to complete the canopy walkway numerous times by myself, seeing bush-babies, and actually getting to spend the night in park! Taking people on a night walk was incredible, spending the night is highly recommended. Coming to Ghana to work with uVolunteer was one of the best decisions I have made, and has really left me with loads of amazing memories, new stories and good friends. I will always miss living in Koforidua, and look forward to my next trip to Ghana!