The first week was really relaxed because the kids were on break from school.

This allowed us to get to know them and help out with some cleaning and such that they needed done. We also got to help out with English classes for adults and teenagers in the community. Two other volunteers and I worked with the adult women's class.

Every kid deserves and needs a safe place where they can play, where they can study, and where they can just hang out and relax with their friends, a place where they can receive attention and love from adults that care. Unfortunately, there are too many areas of the world where this type of place, where kids can just be kids, doesn’t exist. I work as a teacher at home, but it is difficult to actually get to know kids in an environment in which I am an authority figure. Because of that, in the summers, I try to get an experience where I can be with kids playing a slightly different role. Through uVolunteer, I have volunteered twice in community centers that had after school programs and other activities. 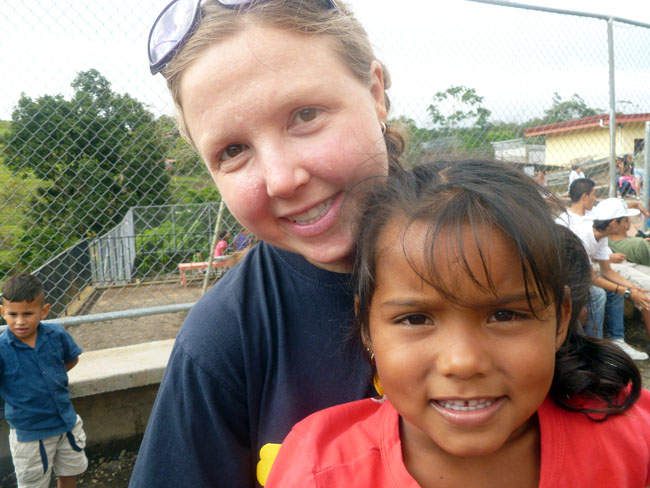 I chose UVolunteer for several different reasons. The first time I did an internet search and uVolunteer had programs in areas that I wanted to volunteer. It had a price tag that I could afford and set up homestays. The homestay aspect was important to me , since one of the reasons I wanted to volunteer in a Latin American country was to practice my Spanish. The organization seemed be a very ethical one, emphasizing working through organizations in the community. Programs offered were interesting and varied. I had a hard time picking out which one I wanted to do. I chose community center type projects each time because I felt like I was qualified for them and that I could make a difference. UVolunteer has more than lived up to my expectations. Each time that I volunteered I had a person who picked me up at the airport, gave me a detailed orientation, and also gave me a tour of the community. Throughout the program they offered continued support and checked in frequently to see what I was doing.

At the community center at Bajo Tejares I played several different roles. The community center was located in a community that one could see really needed such a place to exist. We were given a tour of the neighborhood which was a little shocking. The houses were really tiny and a few of them just had a lot of trash around them. Drug use and teen pregnancy were big problems in the neighborhood, and the community center gave the kids a viable alternative s to this as well as positive attention from adults. The educational component was a big part of what they did. The first week was really relaxed because the kids were on break from school. This allowed us to get to know them and help out with some cleaning and such that they needed done. We also got to help out with English classes for adults and teenagers in the community. Two other volunteers and I worked with the adult women’s class. It was a little challenging, because the women all had different levels and attendance seemed to be directly related to the weather. We had to go really slow, slower than I had thought because pronunciation was really difficult for them and a lot of times they were scared to even talk. One thing was certain though, the classes were always fun! The women made it seem more like a club than a class. The ones that did know more really helped each other out.

I really wished we could have made the class a permanent thing, but because of the school schedule starting again, it wasn’t possible.

When classes started up again, we started working with homework help and with literacy. This was really eye opening as well. Being a high school teacher, I had never taught someone how to read and didn’t really have a conception of how to do it. At Bajo we had readers and helped kids learn how to say the syllables correctly. It was crazy, because even some of the older-ish kids had trouble with reading and writing. Helping them with their homework, you could see how this really affected everything. Working one on one with the kids allowed me to get to know them, and their own individual personalities.

When homework was done, we got to play with the kids. This was by far the best part.

I gave some kids underdogs on the swing set (where you run under as you push) and all I heard for a week was “Meseme” or “swing me.” There was this one kid who really liked it, and he would always get the biggest smile on his face. I got to be “Shark” and “la anda” on the playground, and well as the “mommy.” It had been a long time since I just got to play. It was wonderful!

At night I got to help teaching the English class at the college in San Ramon. I had so much fun with them. Getting to work with adults was cool because it made you feel more a part of the community. The learners were all really motivated and seemed to want to be there. Since one of the most important parts of a language is talking ,the classes were conversation based. This made it really fun and I felt like it was a good way for the students to learn. I would recommend getting involved in this to anyone who does uVolunteer. It feels like you help them so much, and they get to help you as well.