Spending three weeks in Costa Rica on Camaronal Beach and working with others from around the globe was one of the best experiences I've ever had abroad.

The campsite is simple and welcoming, with the ocean just a thirty-second walk away, and a beautiful landscape overlooking the back. There are two areas for volunteers to stay: the second floor of the main cabin, as well as the second floor of another cabin that is a few meters away. There are a kitchen and an office that open up into an open roofed area where the volunteers and guides will eat meals, take breaks, or escape from the sun on occasion. There are a total of three bathrooms and showers available on the site. All this space definitely proved to be necessary during the time I spent at Camaronal; there were around twenty volunteers or so present at one time. 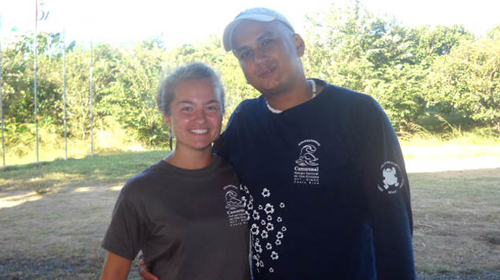 There was a lot of free time during the day since the patrols took place at night in four-hour increments, covering roughly a thirteen hour period.

The daytime hours were filled up with many different jobs, such as helping to build a new volunteer house, fixing the turtle hatchery, or cleaning the beach. The biologists that I worked with were very knowledgeable about every aspect of sea turtle conservation. They proved not only to be great mentors and guides but friends as well.

After the very first night of working on the beach, I knew that I would enjoy every minute of volunteering. Just as we were finishing up dinner our guide Nelson had called us out to the beach only to witness a baula turtle, commonly known as the leatherback, come up on the beach and lay its eggs. This is the most endangered of all the sea turtles, and we were lucky enough to see it our very first night working. The surprises did not stop there, because about two hours later, we saw about seven baby baula turtles hatch and begin to take their first steps towards to ocean.

It was unbelievable that an animal that could fit into the palm of my hand could grow to be around 500 kilograms someday! Later that same night as we went out on our first patrol, we saw a handful of lora turtles (the species most common to Camaronal Beach) and helped in relocating the nesting sites and monitoring the beach.

Each night proved to be an adventure, with shifts rotating to ensure that one group did not have to repeat a shift. Each patrol group consisted of about four to five volunteers, the beach was monitored the entire night over a period of about thirteen hours. Some nights were more eventful than others, depending on how many turtles would come to the beach to nest. At times, we would see a nest dug up by a predator or poacher, and it would remind us that the turtles have a lot of overcoming before they even make their first steps into the big marine world. Each night was filled with new visual adjustments (since we would be working in the dark with the moon as our main light) and escaping the high tide, or enjoying the peace of dry shoes while the low tide lapped the shore.

The best moment by far occurred during an early morning shift as the sun was rising. Our group had stumbled upon turtles hatching, with ten sets of tracks already reaching the waves by the time we had found it, indicating that these turtles had already made it out the sea. There were about six more turtles that we helped to release from that nest, and it was very rewarding to see.

During my downtime, I traveled around the area with friends and explored. We went hiking, played beach volleyball, battled the waves on the Pacific Coast, and traveled to some local towns and beaches to experience parts of Costa Rica that aren’t so much touched by tourism. I got to know some very genuinely nice and funny locals, expanded my fluency in the language, picked up absolutely delicious recipes, and added some serious flair to my knowledge of merengue and salsa. There was not a day that was not filled with laughter, great conversation, and the absolute essence of what is known in Costa Rica as Pura Vida. The impact of the knowledge I gained, the complete cultural and language immersion, as well as the unique fit of tying in biology with the Spanish language, are irreplaceable to me.