If you’re keen to get under the skin of Thailand when you volunteer abroad, July is prime time to book your trip. Early in the month, the Phi Ta Khon - or Ghost Festival - is held in Loei; this unmissable event is a celebration of Buddhist tradition and local culture.

Renowned as one of the nation’s most popular festivals, Phi Ta Khon is scheduled to take place from July 6th to 8th in the Dan Sai district, and this year’s event promises to be bigger and better than ever.

The festival - also called Bun Luang - comprises colorful parades, plenty of mischief and ghostly costumes galore! While the event is fun-filled, it has cultural origins and religious roots in Buddhism - keep reading to learn more about the origins of Phi Ta Khon and what you can expect to see during a visit to the festival. 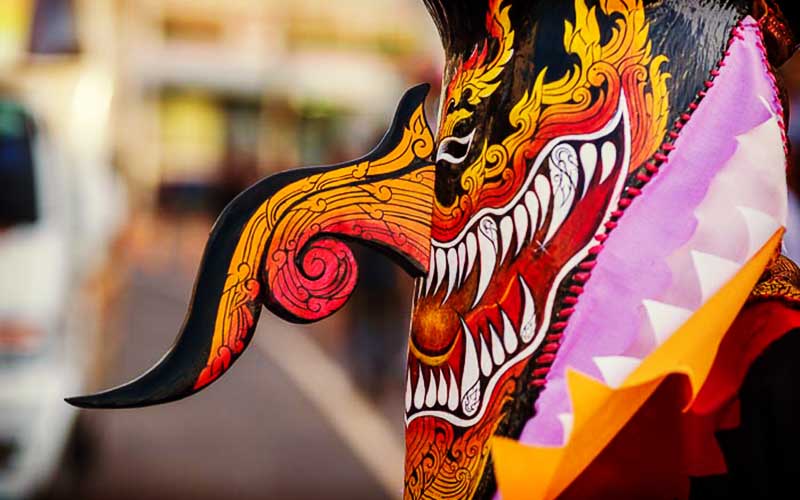 The story behind Phi Ta Khon

In Buddhist folklore, a generous man named Prince Vessadorn - who would eventually become Buddha - gave a white elephant to the local people. Elephants were royal creatures believed to symbolize rain, and this made the people worried that a drought may ensue and a famine would result, thus they sent the prince into exile.

After a long time, the townspeople recalled the prince back to the settlement and welcomed him joyfully on his return. They put on celebrations that were so elaborate and loud that even the dead awoke to join in the festivities. Now, to celebrate Phi Ta Khon, the people of Loei dress up and put on ghost masks to commemorate the happy day.

The Thai people go to great trouble getting into costume for the Phi Ta Khon celebrations; sheets and blankets are sewn together to create makeshift shrouds and large, long masks are made by carving designs into the bases of coconut trees and then painting the mask to resemble a ghostly face. Hats are made from bamboo containers, usually used to store sticky rice.

Dressing up for the event is such a significant part of the festival that a competition is held to determine the best masks and costumes among those present, and there’s even a prize for the best costumed dancer. 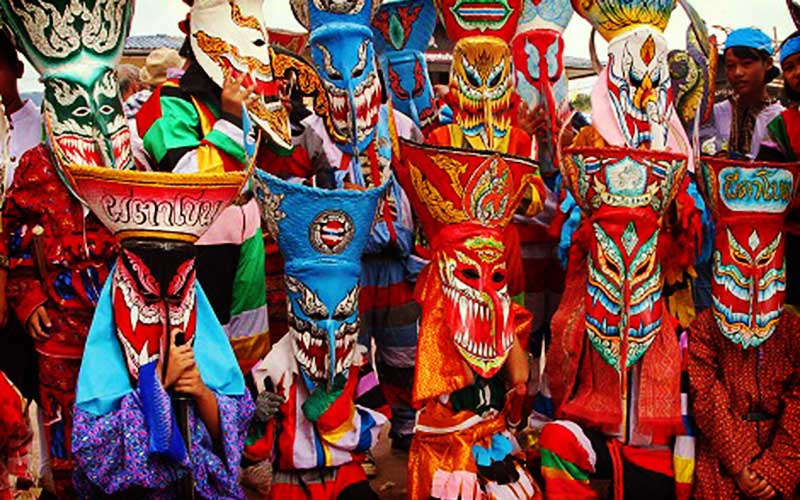 There’s no better way to show off a jaw-dropping costume and mask than with a colorful parade, and a couple of processions take place during Phi Ta Khon. On the first day of the festival, a masked parade is held throughout the town, accompanied by music and dancing.

On the second day, another procession takes place, with locals carrying a sacred Buddha image through the streets and dancing their way to the town’s main temple, where they let off rockets. 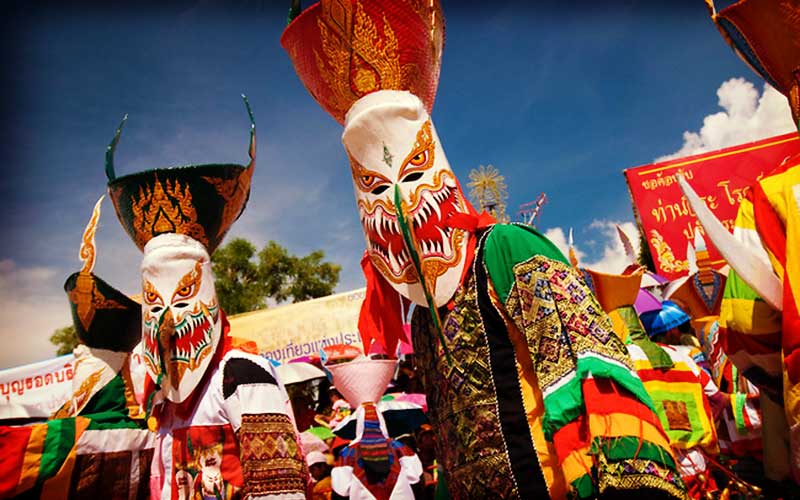 As the main industry of the area, agriculture is a central theme in the celebrations, as festivalgoers make merit and hope for a bumper year of crops ahead.

During the event, groups of farmers can be seen not exactly in costume but certainly standing out - these men smear themselves in fresh mud and carry staffs, signifying the importance of the land to their livelihoods and appealing to higher powers for rains and a favorable harvest. 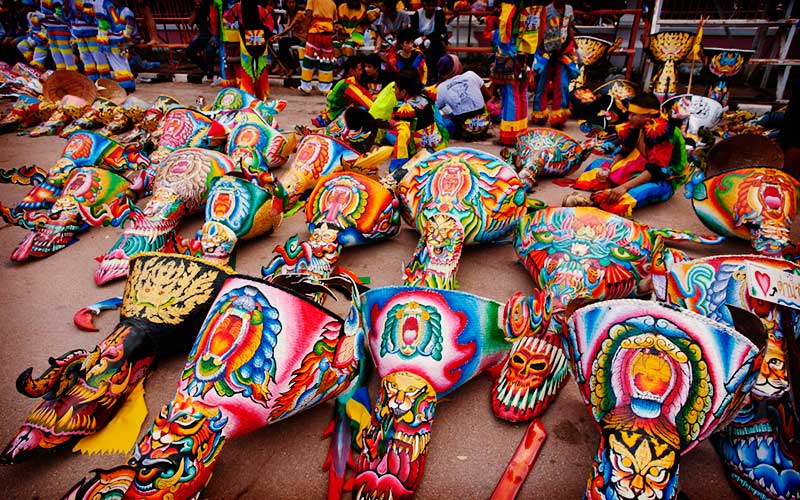 The festival is a three-day merit-making event of great importance to Thai Buddhists. On the last day of the festival, locals make their way to the main temple, Wat Ponchai, where they listen to Buddha’s sermons, which are given by the monks of the temple.

Over the course of the event, the townsfolk ask for rain to ensure a good crop season ahead, in-keeping with the original theme of the folkloric tale, and the Nekkhamma ordination ceremony takes place in the ubosot - or holiest room - of Wat Ponchai. 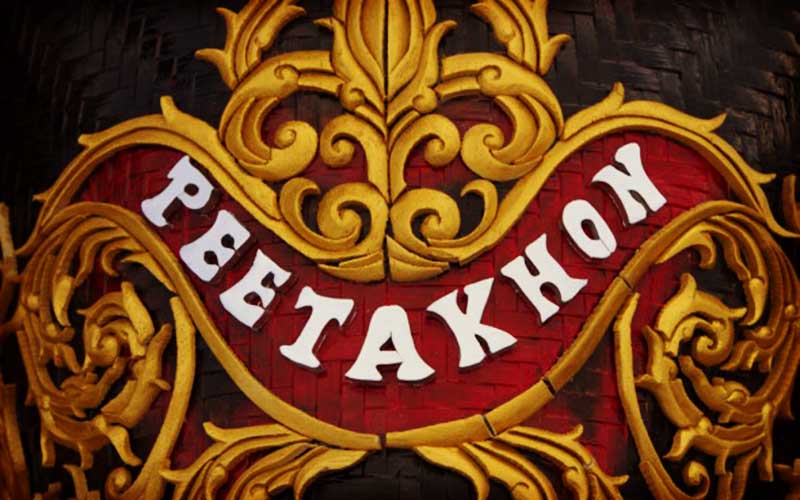 Music plays a big part in the Phi Ta Khon festivities; as such, you’ll be able to hear a lot of traditional Thai music during the processions and also during performances of song and dance that are held on a special stage.

Another element of the celebrations is mischief; tricks are often played by festivalgoers but nothing is usually performed in poor taste. During the parades, dancers pull amusing poses and tease the audience in a carnivalesque manner. There’s typically tasty Thai food and drink served throughout the area as part of the event and local handicrafts can be spotted decorating the town’s temples - you pick up some souvenirs of your trip at the large trade fair organized just for the festival.

Phi Ta Khon is a colorful, unique and vibrant festival, combining a party atmosphere with rich culture and folklore. Don’t miss out on this absorbing, fun-filled event during your volunteer vacation - click here to download our country brochure and learn more about what Thailand has to offer. 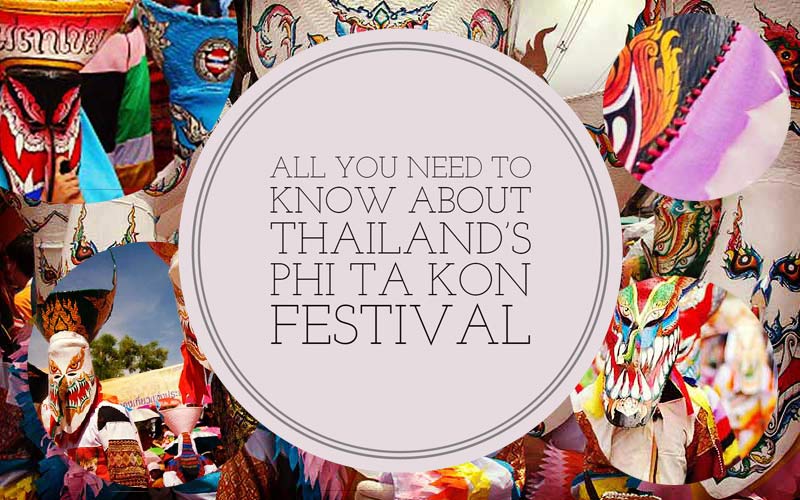